Complete your scary zombie Halloween costume by trying out these zombie makeup ideas!

Zombies are the living dead: animated, decaying corpses who wander the earth wreaking havoc in their path. The concept of zombies originated from the practice of Voodoo, in which they are under control of a sorcerer and do not operate on their own will. Sometimes they even feed on live humans.

The first film about zombies was Night of the Living Dead, directed in 1968 by George Romeo. Since, zombies have been featured prominently in horror films, establishing them as highly identifiable figures in pop culture. Notably, Michael Jackson's 1983 Thriller video featured a troupe of dancing zombies.

To achieve a simple zombie look, begin with white face paint or powder. Apply it all over your face and neck to achieve the appearance that the blood has been drained from you so that you look dead.

Before attempting to create any zombie look, be sure to have the basic makeup necessities on hand. Always start off with a clean face free of oils and makeup. By using products under your makeup, the makeup may slip off your skin and not hold properly.

To create your basic zombie look , you will need: 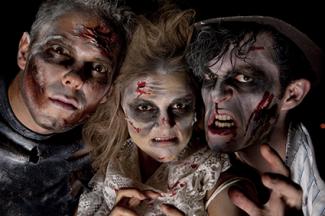 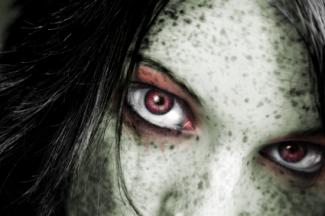 Keep the zombie makeup basic and pay close attention to applying the makeup in a realistic fashion. Be sure to use makeup on exposed areas such as your neck, hands, arms and even feet. Use darker makeup to create a dirty look like you stepped out of the grave on your feet and hands. 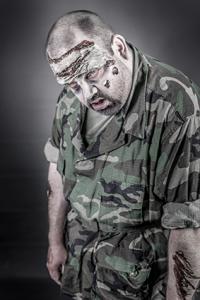 This can be achieved by using the black and green makeup and applying it lightly with a sponge. Add some baby powder and gel to your hair to make it look dull, matted and lifeless as well. Be creative and add whatever you like. There are no set rules to what a zombie should look like. It is up to you and the possibilities are endless.

Take the zombie look described above one step farther by adding some fake blood. Purchase fake blood where Halloween costumes are sold, or make your own by mixing water, corn syrup and red food coloring until it resembles the consistency and color of human blood. To make it more realistic, add a very small amount of blue or yellow food coloring to tone it down.

After you have applied your zombie makeup, smear or drip the fake blood mixture on your face. Try dripping blood from the corner of your mouth and your eyes.

Go all out with your zombie look by adding a festering, open wound to your face. Layer liquid latex to resemble torn flesh. You can create similar effects with unflavored gelatin, marshmallows, or experiment with mixtures of flour, oil and cream of tartar. Rather than create your own, you can buy strips of fake flesh or scabs that you can attach with a thin layer of liquid latex. Liberally apply fake blood to your wound to achieve the ultimate gory effect.Use blue and purple makeup to create fake bruises. Get creative and draw fake scars with a white or pink makeup pencil. For a several week-old zombie look, blend in green and yellow makeup to achieve a rotting wound effect. 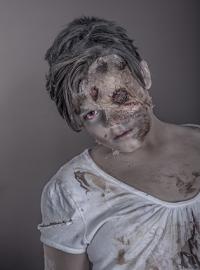 There are a number of ways to get creative with a zombie look and add special effects:

Create a Back Story for Your Zombie 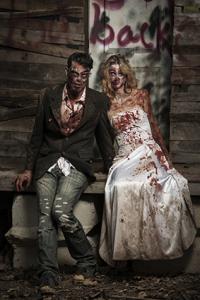 Since zombies are essentially dead people, you can get creative and come up with a story about who you were before death and exactly how you died. Perhaps you were a doctor, policeman, cheerleader or pilot. Did you die in a car accident, stabbing or sustain gunshot wounds? Did you die recently or has it been awhile? Zombie brides and grooms are great as a "couples costume" and zombie cheerleaders add a bit of pep to the undead world. Whether you share your zombie story with friends or not, having a scenario in mind can inspire you as you apply your makeup.

Where to Buy Zombie Makeup

Most major retailers such as Target, Wal-Mart and many drugstores carry Halloween costumes and makeup kits. For the simple zombie look listed above, you can use regular cosmetics to achieve this effect. To create special effects, you can purchase zombie makeup kits from many online retailers:

While many kits come with tools to help you apply the makeup, you can use regular makeup tools as well as a few other handy supplies you probably have around the house:

Before Halloween night or the party you plan to attend in costume, practice your look so you are comfortable with applying zombie makeup. This will give you an idea of how much time you need to get ready. Test products on a small patch of skin 24 hours before applying to make sure you don't have an allergic reaction. Set your makeup with a light dusting of baby powder so it doesn't melt off throughout the evening.Makeup shouldn't stop at the edge of your face. Be sure you blend your zombie makeup to your hairline, over your ears, and down your neck. Don't forget your hands, too. Cover any skin that is exposed, or you'll lose your zombie credibility!