When you learn how to put mascara on, you're doing a great favor for your eyes. Mascara is the finishing touch to any eye makeup look and brings instant drama to your eyes. Not all mascara is created equal, so decide what your lashes need (volume, length, just some color, or all of the above) so that you won't be disappointed by the results when you learn how to apply it.

Steps for Putting Mascara On

Once you've decided which color and type of mascara you would like to use from the collection of volumizers, lengtheners, natural tints, waterproof formulas, and washable formulas available, it's time to coat the wand.

Before you apply mascara, you may also want to curl your lashes beforehand, though that isn't necessary.

Start by holding the wand horizontally along the underside of the lashes, at the roots.

To apply to the lower lashes: 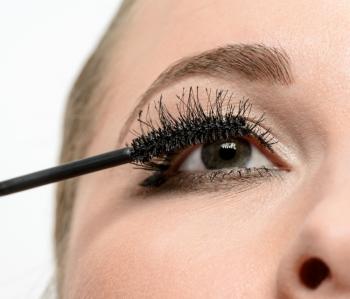 Some mascaras come with a primer on one end and the colored formula on the other. These are just as easy to use as regular mascara, though they take another minute or so to apply.

In most cases, this is the most effective way to apply primer and mascara combinations, though some formulas work best if you allow the primer to dry first. If you try applying mascara directly over wet primer and end up with grayish lashes, try letting the primer dry before applying the black or brown mascara.

Mascara primers fatten up the lashes and add a little length before the color is ever introduced. It can also ensure that your mascara stays on longer, rather than wearing off or flaking and falling down onto your cheeks.

These are the mascara wands with softer bristles. They're not quite as spiky as the plastic ones, and they're often packed tightly together. They can come in several widths, from the large brush of Diorshow and L'Oreal Voluminous to the smaller one in Maybelline Great Lash. These can deposit quite a bit of product at once, and are often used with volumizing and lengthening formulas.

Trending through the 2000s are the spiky, plastic brushes found in formulas like CoverGirl LashBlast. Formulas tend to be thinner when paired with these brushes. Although some of the mascaras are designed to be volumizing and lengthening, just like the ones with traditional wands, the thin plastic bristles tend to separate the lashes a bit more.

Sizes vary here, as well, and some wands and brushes in this category are flexible while others remain rigid. Flexible versus rigid wands are simply a matter of preference; some feel they have more control and get a better coating for their lashes if they use flexible wands while others feel they're messy, flinging mascara to the wrong areas of the face.

The difference here is in the size and shape of the brush. Instead of being long enough to coat the underside of the lashes all at once, for example, the ball is smaller and allows for more control.

Application takes longer because it covers fewer lashes at once, but if you typically make a mess with the longer brushes, it could still save you time in the long run if you're not having to clean up stray mascara smudges. It can also be easier to reach the inner corners, undersides, and lower lashes with this type of wand. One example is Givenchy Phenom'Eyes.

Curved mascara brushes have been around for decades, as a sort of built-in lifting and curling method. Another type of brush is merely "curvy" with some areas that are wider than others along the length of the brush.

This one is also designed to add curl to the lashes, but often claim to separate them as well. Two examples include L'oreal Paris Curvy Brush Mascara (traditional bristles) and Rimmel Rockin' Curves (plastic bristles).

When One Coat Isn't Enough

If you like drama, one coat probably will not be enough for your lashes. You'll want a second and perhaps even a third. The key to applying multiple coats of mascara is to never let one coat dry before applying the next. Applying wet mascara to already dry lashes will result in flaking and the dreaded "spider legs" appearance.

If there's a volumizing mascara you love and a lengthening you love as well, try doing one coat of each for the perfect, flirty lashes you're hoping for. People might not even believe they're real.

0
Comments
© 2006-2021 LoveToKnow, Corp., except where otherwise noted. All Rights Reserved.
How to Put Mascara On