Pirates are popular costume ideas for Halloween for people of all ages. Knowing the basics of the pirate look, including how to make the most of your costume makeup, will make putting your costume together a snap. Try some of these looks for great pirate makeup!

A male pirate's look can be as mean or as socialite as you like. Regardless of the outfit, the makeup for a male pirate has this basic look shown here. 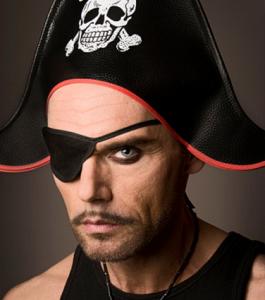 A female pirate looks sexy but rugged. When applying makeup, think glamourous over scary. To achieve this look: 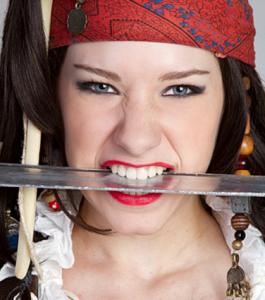 Applying your Halloween makeup may require a little practice. Before going to your costume party or event, try out your makeup so you know what you can easily achieve. Be sure to keep sponge applicators, makeup brushes, cotton balls and cotton swabs handy. Different makeup elements require specific applicators. For example, a cotton ball or cosmetic sponge can blend out dark makeup to create a shadow of stubble. Experiment to find the techniques that will work best for you.

Even if you're adding an accessory like an eye-patch, do both eyes in case you want to remove the patch later.

Where to Find Pirate Makeup

In addition to the contents of your makeup bag, there are kits available made specifically for Halloween and certain costumes. The basic pirate makeup kits contain white, red, and black makeup. The colors can be mixed to achieve your own desired look. Use the dark makeup to create scars and stubble. Use the white makeup to highlight. Red can be used on the lips and cheeks or wherever you want to create a bruise or scar. Remember that most costume makeup is best removed using a cold cream instead of soap. Always be sure that the makeup doesn't irritate your skin and be careful around your eyes.

Many local Halloween shops sell the pirate kits or you can try one of the following online retailers:

If you are stuck on which pirate makeup look you want to create, check out pictures of your favorite pirates from the big screen including:

Pirate makeup need not be difficult. A steady hand with face painting can add scars or tattoos to your look if you want to have a 'weathered' appearance. Everyone knows the different pirate outfits, but your makeup can make your Halloween pirate costume stand out from the rest.

0
Comments
© 2006-2020 LoveToKnow, Corp., except where otherwise noted. All Rights Reserved.
Resources, Advice & Tips for Covid-19
Read More
How To Do Your Makeup for Halloween Pirate