The history of theatre makeup is rich and varied. Humans have for thousands of years sought to express themselves through drama, and the accompanying makeup is a natural offshoot of this wonderful form of art.

Coming from the Greek word for "action", drama and theatrical performance is indeed accompanied by the actions of unique characters and representations. The earliest documented drama is considered to be Aristotle's Poetics written around 335 BCE, but the first evidence of dramatic makeup came later, around the 6th century BC.

The earliest known use of theatrical makeup was by the Greek actor Thespis, who, in an effort to stand out from the Greek chorus, painted a toxic covering of white lead and mercuric sulphide to create a white and red face paint. It is debated whether these toxic substances continued to be used in Greek drama because linen masks representing comedy and tragedy (based on the muses Thalia and Melpomene), were used to convey expression. Although contemporary performance uses theatrical makeup to convey character, and facial expression and tone to convey emotion, these Greek masks continue to exist an instantly recognizable symbol for drama.

Use of Theatre Makeup Grows and Evolves

The use of makeup for theatre appears to have become more common in the 1500s and 1600s. In the 1500s, performers in medieval religious cycle dramas utilized face paint to depict certain characters. Performers in Elizabethan England used chalk and soot on their faces to depict characters and show expression. False makeup beards also appeared on the performers. Also during this time period, the Japanese Kabuki theatre emerged, and the performers wore elaborate face makeup. 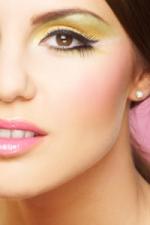 The crude face paint used in these early decades evolved to more sophisticated methods with the emergence of the industrial age. With artificial lighting available for productions, it became necessary that performers have a more polished look.In addition to the previously mentioned compounds, before the mid 1800's, substances used for makeup included white powder or chalk, burnt cork and paper, and pigment powders.

Greasepaint was a unique invention that was a vast improvement for both stage and film. Developed by a German actor, the paint was achieved by combining lard with pigments. The result was a smoother and more versatile application. Ready-made grease paint was later produced for retail sales. More items, such as lipsticks, liquid liners, waxes, and makeup sticks were introduced as the 1900s approached.

Another big innovation in stage makeup emerged in 1914 when the icon Max Factor developed pancake makeup, which was a water based makeup that provides thick, matte coverage. This innovation has carried on through today, although formulas have continued to evolve.

Modern theatrical makeup has come along way from the dubious chemicals and rough techniques of its early usage. A true art form, modern dramatic makeup looks range from makeup that is realistic looking, albeit much heavier than standard cosmetic application, to highly unusual characterization, animal, period, special effects, and avant garde makeup looks. The ingredients in today's stage cosmetics are also safe for the skin rather than containing the toxic or questionable compounds. Some of today's leading brands of stage makeup include:

For a more in depth look at theatre makeup history, there are several options. Although options aren't extensive online, some costume and makeup sites include makeup history information as well as info. on applying stage makeup, such as:

Books and classes can help you learn more about the history of theatre makeup. Many colleges offer majors in theatre and theatre history, and even if you aren't interested in a theatre degree, many places allow courses to be taken for enrichment purposes. Courses in the history of stage makeup are also often offered as requirements or an elective for makeup artistry. You may also be interested in the following books on the subject: