After a busy week negotiating a new contract with NBC, Eve Pearl took a breather to chat with me about makeup and the ways to use it most effectively. During the interview, Eve's energetic nature shown through and her breathless voice sang out these incredible words of wisdom.

Behind the curtains at ABC's hit talk show, The View, hides a four time Emmy Award winning celebrity makeup artist better known as Eve Pearl. Except, you will not always find her concealed, as now her makeover segments air on national and local television shows.

Eve's career began at the New York City Opera where she got up close and personal with Al Pacino as an Assistant Makeup Artist. This amazing break provided her the opportunity to shine and grow her skills into the American Ballet Theatre, makeup design at Madison Square Garden and more. In her current role as the Key Make-up Artist on The View, she maintains the look of the hosts on the show. She has also worked on a variety of other events including The Academy Awards, Good Morning America and Dateline. Not limiting herself to television, her skills also appear in magazines such as InStyle, People and Vanity Fair. 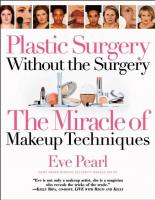 Read up for even more makeup tips.

Plastic Surgery Without the Surgery

Eve's book, Plastic Surgery without the Surgery: the Miracle of Makeup Techniques was published by Warner books in 2004. Known as a magician in her celebrity circles, Eve coined the phrase "plastic surgery without the surgery" when describing her youthful makeup techniques. The book arrived at a perfect time amongst the botox and lunchtime facelift craze to introduce options for women who want to look younger and avoid the plastic surgeon. A DVD highlighting the techniques from the book in real-time will be released in June of 2006. For further information on her book, DVD or makeup line visit her website at www.evepearl.com.

Due to Eve's start in theater, she acquired skills that were fancier than the average television makeup artist. Theater makeup requires you to recreate an actor's appearance and she learned to apply those skills to the average person. In Eve's words, "When you know the theory of how light hits you and how to work with the camera and lighting on faces and structures, I realized I had this incredible advantage on how to reshape faces on a daily basis."

Tell us a little about your book, "Plastic Surgery without the Surgery"?

I wanted to put all my tips on paper, because, when you have a great makeover a woman feels great, but if you want to feel good all the time a book can teach you how to do your own makeup. I am hoping with the right education and the right tools and very simple products, women can take control of their face. We spend hundreds on clothes we never wear and sometimes on shoes we might wear once - but it's your face, so, invest in it.

What is one or two youthful makeup tricks you would be willing to share?

Here is one great thing, you know how people have facelifts to lift the face and smooth out the lines? So, now, think of blush - when most women put blush on, they tend to suck in their cheeks and put it down in the bottom in the hollow. If instead, you take the blush and lift it slowly up closer to your eye, then if you look in the mirror you will see your cheek has just been lifted. That will give you the appearance of youth.

How to cover up dark eye circles is another one of the biggest issues women have and if you look - the circles are blue veins - and most women have been taught to place yellow there. But if you think about it, you are actually mixing yellow and blue and then what do you get… green! You then end up highlighting the area you are trying to cover up. Instead, the color that really works under your eyes is a salmon color. I talk about this in the book, the color salmon is like a cross between a cheese doodle and a French fry, that color works for every woman's skin color - just stick to a warm tone.

How does makeup make your body and face appear younger?

The way makeup makes you look younger is helping you to accentuate and draw the viewer's eye to the areas you want to feature. Let's say you have a large nose, so focus on your eyes. Or maybe you are not happy with the way your lips are not big enough - so you just draw the lips line in, make them appear fuller. As people get older, our lips actually get wider… and they start drooping - the trick to make your face look younger is to take them in from the outer corner and to actually make them not so wide, but full. When you think of full you think healthy. Even the women I work with on television - I recreate their lips and make them look more youthful by actually making their lips smaller on the outside corners but wider on the inside and I round them off to avoid the points.

Check out the DVD for even more information.

Some people say you should never use anything shimmery when you get older, I disagree with that. I think when you get older you want to have a little of that dewiness - I am not saying to use glitter, but have a little bit of light reflection as it gives your skin the appearance of moisture. When you apply something with a little more shimmer, it also will go into the lines and the lines will not be so apparent.

What is the best way to hide the true sign of age… wrinkles?

Most people feel that loose powder is not good if you have wrinkles, but that is a misconception. If you take the loose powder and you powder your face around the eyes to set that foundation in and then head toward your nose - what you are doing is setting the makeup into those nooks and crannies - like you are filling it up. Then the makeup will not move and head into the creases, it is just going to be solid now. That loose powder will really help fill in those lines around your lips too... preventing your lipstick from bleeding. Make sure you put foundation over your lips, then you put loose powder over before you put on your lip color - you have created a nice barrier of primer for you lips - so whatever you put on is not going to move.

If you put a little lighter color foundation, like concealer, around the lips, or your laugh lines, or frown lines, like a highlighter, that also helps bring out the places that are deeper set. Think of spackle on a wall… any part of your face that is deep set that you want to bring out (except under your eye where you use the salmon) you want to put a light color.

How should women select their makeup products and brands?

It is very important to match the product to your skin - as long as you know how your skin works. For example, for Caucasian women, the best place to try on foundation is not on the back of your hand. Where you want to try the foundation is right on your jaw line and when the foundation is mixed in, the face and neck should be the same color. If you are a woman of color, foundation tends to oxidize - which means whatever color you put on your face tends to get darker within a half an hour. So, you actually have to start with a shade that is two colors lighter than your skin and then wait about fifteen minutes to find the color that would be right for you. As far as how to find the best product - go to a place with a lot of variety, that will give you products to touch and feel. I personally like using cream products because it is easier to adjust the coverage. By taking a sponge and wet it, dry off with paper towel, then you use that in the cream to make it as sheer as you want.

What advice do you have to makeup artists just starting out?

I would tell them to look within their town to see if there is any theatrical place that would give them faces to play on. Take any job they offer you, even if it is for free. Whether it is in the theatre, or a school production, or at the makeup counter in the mall - they will teach you. Try to get as much education as you can - that doesn't mean you should go spend $10,000 on a school - that means you should try to be out there where people are doing makeup. You can have all the education in the world, but if you don't have the hands-on experience, the education will do nothing for you

Fake lashes are a big trend - don't be afraid to try them.

Check out my amazing new DVD that is over sixty minutes of youthful makeup techniques. Order it online at my website. It took me four years to put it all together, so it is a project I believe in.